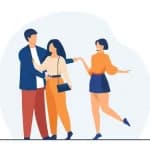 Disloyalty between companions. Causes and means:

Nowadays, infidelity has become an everyday occurrence due to the relaxation of moral barriers that prevents the infidelity factor. There are incidents from both the sexes whereas earlier it was by men mostly. This is because the legal framework can give scope for infidelity on both sides. Many couples are resorting to private detectives to ascertain whether they are victims of infidelity.Even technology is an additional factor because apps, social media, and anything that has to do with communication app is a good aid in communicating with the illicit relationship. Everyday life wears down a relationship. Often the search for another partner is done to make a temporary change while maintaining the security of the relationship.

Infidelity in men and women

The reasons that contribute to infidelity vary. But the main ones by common agreement are the following:

The first signs of infidelity are the following:

Mobile phone use at an increased frequency

This can be seen by watching the mobile phone all the time. If in a conversation the gaze is blank or does not participate. This should be done repeatedly. But if he knows how to ”hide” you send some messages one or two a day to see if he checks them (not only sees them but also replies). Many couples have even gone as far as monitoring cell phones or social media accounts or hiring private investigators to make sure there is no infidelity.

Sudden changes in behaviour can be a sign that infidelity is happening and there are ways to make it noticeable.When you ask some simple questions e.g. how was your day? What did you do in the morning? and type questions about work and why there has been a change in a habit are likely to upset her and there will be some indication of suspicion. Another way is to unexpectedly barge into the home or meeting places agreed upon under the pretext of an unexpected change.

This results in a gradual or abrupt decrease in sexual intercourse over a fairly long period of time or an increase either because of remorse or as a distraction to avoid raising suspicions.

It has been observed that when the brain tells a series of lies, it gets used to doing it automatically. So even for simple issues some inconsistent thoughts come out that are not consistent with the question or dialogue being asked. This is also done by ‘professional’ liars because in moments of relaxation some clues come out with strange off-topic words or non-existent things that are not easily picked up or hidden.

Since the couple is living together, the expenses are generally known. If these increase, either through cards or cash, it is all the more reason to investigate if there is something mischievous. It is optimal to ascertain if the above indications are happening with frequency and over a long enough period of time. Then more frequent questions and constant changes to the daily schedule are made. If sufficient evidence is gathered no matter how much they hide at some point the deceitfulness of their actions will be revealed.

Detectives have always had a large number of cases of infidelity. Sometimes the findings indicated that infidelity was indeed taking place, but other times the suspicions were wrong. This is because many of those who went to detectives suspecting that their other half was cheating on them did so because it happened to someone they knew. So before taking the step of a private investigation there should be some serious evidence and not just a suspicion.Detective Infidelity Among Companions. Pelekasis Nikos and Associates. Private Investigations Bureau.