The rise in usury and its effects

Two brutal crimes with four dead. Dozens of suicides of respectable businessmen. Thousands of family dramas, unfolding daily behind the closed doors of homes and shops. This is what has been caused in the space of just a few days by the terrifying upsurge in usury. Threats, blackmail and beatings are enough to make the fortunes of millions change hands from one day to the next. Borrowers are driven to desperation and unconditionally handed over to the lenders.

And when the knot reaches its end, they either end their lives and the torture of bleeding or they paint their hands with blood and shock the nation, which watches in stupefaction the dramatic end of the episodes of a red circle, where the perpetrator becomes the victim…

Most of them were and are forced to resort to borrowing from moneylenders. This is because of the serious financial difficulties they are facing, as the debts are suffocating them. The financial crisis has dried up liquidity in the market. As a result, many entrepreneurs and ordinary workers are turning to people who are very willing to give them money to make things easier for them and then… suck their blood!

The murder of loan sharks in Eretria by a businessman

A few days ago, a seaside tavern in Eretria was stained with the blood of three men when a 54-year-old businessman from Evia opened fire on them. According to what he claimed both in his statement to the police authorities and to the judicial officials, the massacre that ‘froze’ the country took place because he could no longer stand the financial drain of a large loan sharking ring. “They had… drunk my blood and they wouldn’t stop at anything. They wanted to destroy me.

At 54, I became a murderer to escape the torment and save my family from destruction.” So claimed the killer and added: “I had reached desperation and was forced to borrow the sum of forty-four thousand euros from the father of one of the victims. The interest, however, was exorbitant. I had already been foreclosed on two houses and they wanted to confiscate my car as well.

In fact, the businessman had filed six lawsuits in the last five years against certain persons for loan sharking, extortion and threats. About a year ago, unknown persons had gone to his car wash in the centre of Chalkida. They started shooting in the air to intimidate. He came to Athens and bought a pistol illegally, as he says he feared for his life. It was with this pistol that he caused the carnage.

The 70-year-old loan shark who was found dismembered

After the triple murder of Eretria and before the blood of the victims could dry, a new revelation came. The dismembered body that had been found on 18 May in a rubbish bin in the area of Petralona belonged to a 70-year-old woman. This one was allegedly a loan shark.

Her dismembered body had been found in plastic bags in the garbage bin on Alkmenis Street in Ano Petralona by municipal employees who went to collect the garbage. The stench over the past ten days has been unbearable in the area, so residents alerted the municipality to see what exactly was going on. Faced with the hideous sight, everyone was left speechless.

As announced by the prosecuting authorities, the victim was a 70-year-old Georgian woman and the perpetrator was a 37-year-old female relative, who, as she claimed in her confession, had borrowed various amounts of money from time to time due to financial needs, but could not repay them due to excessive interest. On 5 May, the 70-year-old woman went to the 37-year-old woman’s house and demanded that she pay the second instalment of the amount owed to her. The 37-year-old did not have the money, and as a result, after an argument, he killed her with a kitchen knife.

Increase in suicides of people due to usury debts

Last Sunday morning, a locksmith, unable to stand the pressure and blackmail any longer, ended his life by falling from the Rio – Antirrio bridge, while a few hours later a 58-year-old businessman in Crete committed suicide by pointing his rifle at his head. His relatives denounce ruthless schemes that took his life as he was unable to cope with his huge debts.

In Trikala, another businessman was found hanged while police officers were handcuffing a 42-year-old loan shark in Korydallos, putting an end to his activities.

They borrow on predatory terms to make ends meet

According to what the president of the Borrowers’ Association Thanos Thanopoulos told “Espresso of Sunday”, “lately, when banks stopped giving money and the spigot was closed, the whole world turns to loan sharks to be able to borrow and make ends meet, even for a while. Thus, the disaster begins.

In recent months the phenomenon has grown out of control. Every day, hundreds of people from all over Greece report their drama to us. Suicides due to debts are on the increase and as time goes by, things are getting worse. On Friday, a businessman in Kalamata who was involved with loan sharks attempted suicide,” he said:

“Some time ago, a truck driver, while on his way to Germany, received so much pressure and blackmail on his mobile phone from loan sharks that they would kill his wife and children, that he could not stand it and died at the wheel from a heart attack. In fact, he needed 32 thousand euros to bring his body here and bury it, and because there was no money, it was cremated by the municipality of Nuremberg in Germany.”

As he revealed, after a comprehensive study conducted by the special secretary of the Ministry of Justice and legal expert Marinos Skandamis on loan sharking, “the professional profile of the perpetrators was revealed: pensioners (20.14%), traders (33.33%), freelancers (33.33%), public and private employees (6.60%) and income earners (6.60%). As regards the profile of the victims, they are: traders (50%), self-employed (37.5%) and public and private employees (6.25%)”.

The interest rates at which loan sharks lend are literally predatory. At best they are in the 20% range, but there are worse ones, reaching and exceeding 100%.

As people who are victims reveal to Mr Thanopoulos, the interest rate is determined according to the money needs of the borrower. The greater the need, the higher the interest rate. “And they all end up in disaster. Usury is now an organised crime. It is about unscrupulous people,” he concluded. 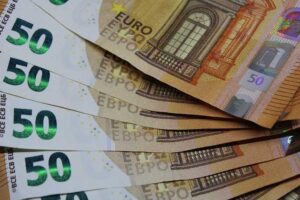 Disappearance of a relative of a loan shark victim

When she gave them everything, then they beat her savagely. In fact, a complaint has been filed against a certain person at the Agios Panteleimon Police Station for the beating.

They threatened her that they would kill her brother. A few months after the beating, when her brother received his pension and lump sum, he disappeared. Three years have passed since the day she disappeared and she is still missing. I have taken over the investigation to track him down and everything points to a loan sharking ring.”

Another case of usury is also being investigated by Detective Nicholas Pelekasis, who, he said: “A businessman has been caught in the net of usury, who is financially ruined and is being blackmailed.

The people threatening him are ruthless. They had lent him 300,000 euros at an interest rate of 40%,” he stressed and concluded: “We are trying to gather all the evidence and send it to the justice system in an attempt to save both him and dozens of people.”