Fire investigation in Greek forests. An interview of detective Pelekasis Nikos in the newspaper “espresso“.


The revelation of a fire by Turks

“And yet, it’s true! Turkish arsonists used to come to our country in the summers and start fires in the Greek forests”. The revelation of the former National Intelligence Service officer Nikos Pelekasis in “Espresso of Sunday” confirms in full the recent statements of Mesut Yilmaz, which dropped like a bomb in the international community causing strong reactions.

The former NIS agent for the first time breaks his silence. He confides his experiences of the secret war between Greece and Turkey. He does not even hesitate to reveal to us the life-saving intervention of his service. At the last minute he foiled the plans of the Turks who were planning to blow up the country’s largest water reservoir!

The private investigator who, during his time at the NSA, along with his colleagues, fought their own battle every summer. Their goal was to prevent the dozens of fires set by underlying arsonists that were burning the country to the ground. What he tells us confirms what Mesut Yilmaz said. Allegations of arson of Greek forests by Turkish secret agents during the 1990s.

Indeed, as Nikos Pelekasis commented, the statements of the former prime minister and current university professor in Turkey “do not indicate a crisis of conscience or remorse from the statesman, but all this hides something that will soon be revealed”.

The hunt for those responsible for the fire

Nikos Pelekasis, together with the people who made up the Department of Public Security, collected information during the winter months about planned arsons in Greek forests. The former NIS agent reveals that the ‘hunt’ for Turkish arsonists during the 1990s was continuous and dangerous.

As he explains to Espresso on Sunday, “all year long we were carefully examining and cross-checking information that ‘photographed’ Turkish agents and ordinary citizens who were planning a fire during the summer months. Usually, they arrived in our country in autumn, September or October, with forged papers or without any papers at all. The service discreetly and in complete secrecy monitored all their movements with the means at its disposal and we intervened at the right time.”

From the moment they arrived in Greece, their first objective was to familiarise themselves with the Greek reality and learn the ropes. “Their first concern,” says Mr. Pelekasis, “was to meet the link here, which was usually a Turkish agent. They were learning a few Greek words and some standard phrases. Then they would plan and decide where to set the fire. Usually, they would choose virgin forests or large areas close to Athens or other large cities.” 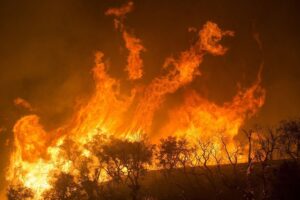 How the arson was organised and the means used

“When after an investigation they were finally deciding where to start the fire, two days before the arson they went to the site at regular intervals making reconnaissance walks either by car or on foot. Then, always in the evening hours, they placed the equipment with the incendiary devices in the right places. All the devices had a clock programmed to set off the powder after either twelve hours or seven days.

But how did the agents themselves feel watching Turkish agents planning the destruction of Greek forests? “It is really outrageous to know and also to see Turks preparing to set fire to destroy flora and fauna, knowing of course that this will also endanger human lives. In the 1990s in question, we had to prevent at least three such incidents every summer. Fortunately, we were 100% successful, but sometimes, for strategic reasons, we did not intervene. The fire might eventually break out, but it did not grow to the size of a catastrophe.

However, Nikos Pelekasis’ complaint after all these years is that no one has been punished, despite the fact that there are confessions of Turkish perpetrators. As he says, “a few years ago, a Turkish agent was arrested for drug trafficking in our country. When he returned to Turkey, he said to the competent authorities the inimitable: ‘When I was setting fires, I was good, and now you want to put me on trial?’

The great water sabotage in 1987

After many years of working in one of the country’s most important government agencies, Nikos Pelekasis recalls his most intense experience:

“It wasn’t arson in a forest area. At that time, the Turks’ plan was to sabotage the country’s largest water reservoir. It was in the summer of 1987 when our information once again came true. It was a well-planned plan that foresaw major damage to the walls of the reservoir in order to lose millions of litres of water. I then experienced one of the most difficult moments of my career, which will always remain etched in my memory. A lot of anxiety and stress… Fortunately, everything went well”.